I was enjoying a peaceful day on Christmas with my family.  Santa hooked us up with an XBox and Kinect, which took over the TV room. My son scored a guitar+amp starter kit, which he promptly took to his bedroom and started working through the lessons.

Eventually (and miraculously), the kids grew tired and finally went to bed.  Then, nearing midnight, my son awoke and called me to his room. I entered on autopilot, not thinking of potential roadblocks such as an elongated cardboard guitar box strewn across the doorjamb. And that's when my foot made first contact and sent me flying through the air, hands outstretched in front of me.

I might have made it all the way to the far wall, had it not been for the foot of his bed being directly in my flight path. My outstretched right hand connected solidly with his Cargo bed. The clearest memory I have, while engaging the hand brake, is the sound my bone made upon contact. I hoped it was simply a cracked knuckle, but the X-Ray proved otherwise. 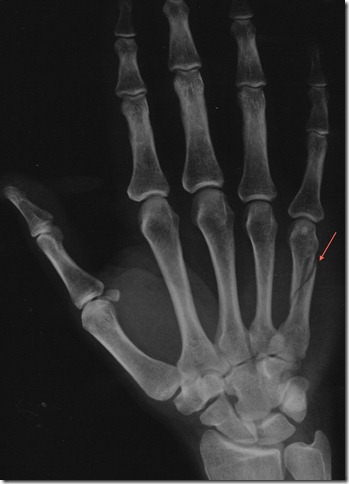 I have  a metacarpal shaft fracture [also known as a Boxer's Fracture, a common injury to boxers who connect with the last two knuckles of their hand during a punch].  My right hand will be immobilized for 2-3 weeks while the bone fuses itself back together.

Luckily I’m left-handed so I’m still relatively functional. I reprogrammed my mouse for left handed operation, and I'm taking advantage of speech-to-text to reduce the need to type.

After this experience I no longer doubt the validity of ER incompetence stories:

So there it is: the story of my broken hand.