Yesterday I heard about Blackbird Pie, a new tool from Twitter to create embeddable tweets. This actually sounded like a useful tool, as there are times I embed screenshots in my posts, some of those being twitter captures. My hope was that with embedded tweets, they’d be interactive (e.g. clickable if there was a link).

So off I went to http://media.twitter.com/blackbird-pie. The claim was that it was faster and easier to embed a tweet.

My initial experience was, um, slower and impossible to embed a tweet. Regardless of which tweet URL I inserted into the UI, I received notice that the tweet did not exist when, in fact, it did (sorry, no screenshot for that). And after only 3 or 4 attempts, I was told that I exceeded some limit. Eventually, the site slowed to a crawl and showed me this:

At this point, I gave up for the day.  And I was all set to move on, until I saw a bit more positive traffic about Blackbird Pie this morning. So I gave it one more attempt.  This time it loaded extremely fast and worked on a tweet that failed to render yesterday. The UI generated an embeddable chunk of html/css:

Pasting this in to this blog post, “magic happens” my tweet gets embedded, though not rendered the way I expected:

Just looked at my dev calendar: 7 #Azure talks scheduled between now and Sept, including a 2-day bootcamp. http://dmak.us/9VQX1rless than a minute ago via web

Just as advertised, my tweet is embedded, and it was incredibly easy. It included my twitter page background. And… all links are preserved: twitter search, site URL, and my profile. Sweet! 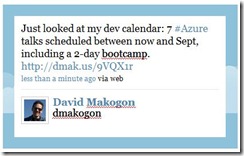 Twitter added some disclaimers, so I suspect this tool will be going through revisions pretty quickly as it rises in popularity. For instance, here’s the disclaimer when adding a URL to bake:

And here’s the disclaimer just following your baked tweet:

Disclaimers aside, this is very cool! I like the idea of an interactive tweet, rather than an unclickable static image (or a static image that I have to wrap a hyperlink around). However, this is not yet ready for prime time, as my embedded tweets are not rendering properly on Blogger.