Being the jokester that I am, you can naturally assume that this trend runs in the family. Indeed, my children seek out every opportunity to play tricks on Dad. Even when they were little tots, I recall such classic attempts as “Daddy, your cell phone is on fire! APRIL FOOLS!” Of course, the moment I played a trick on them, they’d return to their juvenile roots, complete with crying and running to Mom for support.

Fast-forward a few years. My son, a recently-anointed teenager, seemed just about the right age to be targeted this year. Problem is, he’s a smart kid, familiar with my constant pranks and jokes. So I went with something juvenile, assuming he’d get a good laugh out of it. Little did I know he’d take put aside all logic and reasoning, and simply fall for the prank…

A bit of history on my son, and why this prank worked… He’s become a bit of a gamer, and now has his own YouTube channel. He produces lots of Xbox gaming walkthroughs, and more recently has gotten into some really cool music video production with Sony Vegas Movie Studio, synchronizing FPS play with some of his favorite songs. His latest montage can be seen here.

As part of his world of gaming, he’s become enamored with Microsoft Points. Between stocking stuffers and bing searches, he accumulates points and turns them into downloadable content for various games.

Combining YouTube and Points: What if something came along that offered him increased viewership and a bunch of points to go with it?

I receive at least one Xbox Live email update monthly, and there are often promotions announced. I decided to take one of these emails, alter it, and forward it to my son. The premise:

I barely spent any time on the fake email, as I was merely looking to get a laugh out of the absurdity. Here’s a snippet of the email: 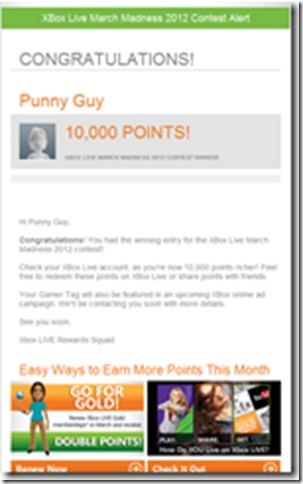 Yes, it’s littered with errors: capitalization of Xbox, “gamer tag” being two words instead of one, inability to transfer points, etc. Yet, he completely believed it (maybe because he was in the middle of editing his next video blog post?). He was my bestest friend. He was dreaming of the possibilities, of the increased friend requests, downloadable content, and more! He even tweeted about it. Here’s a conversation snippet: 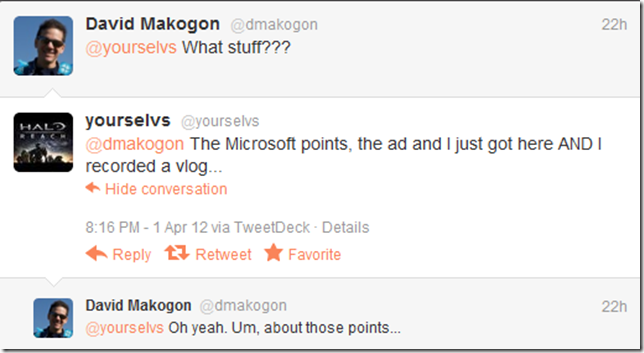 He was about to publish a video-blog, telling the whole world of his spoils. Fortunately I let him in on the joke beforehand – I really wasn’t out to embarrass him, and I’m pretty sure he actually would absolutely hate me if I let the joke go that far.

This morning, he posted a vlog about the incident (starting at the 3:00 mark). He was a good sport about it, even as he tore apart the email, pointing out all of its glaring errors. And… he’s now threatened to get even with me. Maybe today, maybe next week, only that I should not count on him waiting until next April 1. I guess it’s time to brace myself for the worst…